Mark Cuban: Waste Of Time To Try To Turn Pinocchio Into A Real President 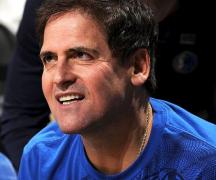 Dallas Mavericks owner Mark Cuban had some harsh words for President Donald Trump after his press conference with reporters on Thursday.

"It's a waste of time to try to turn Pinocchio into a real President," Cuban said on social media. "The focus needs to be on the Geppettos and legislators around him."

Cuban has been a vocal critic of Trump. After a recent series of the POTUS' tweets, Cuban joked: "But isn't it better for all of us that he is tweeting rather than trying to govern?"

He recently told the Star-Telegram that he tried to steer clear of politics during the first 16 years of his Mavs' ownership. However, knowing Trump personally, he couldn't hold back any longer.

"Since 1999, I've never donated to any candidate anywhere," he said. "And that continues and that will continue. I've always thought you shouldn't mix the two. There's no good reason to talk politics. But this guy was obviously different because I knew him."

As for whether his opinions have affected the Mavericks, Cuban said he's probably lost 12 season-ticket holders because of his views.