Marisa Tomei Immortalized On A Skateboard: 'They're Gonna Ride On Me' 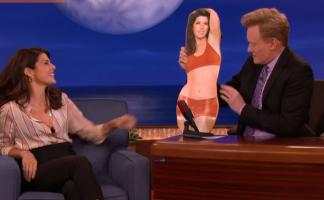 Marisa Tomei has been immortalized on a skateboard.

The actress was one of two people who was picked by a skateboard manufacturer that is no doubt hoping to jumpstart its sales.

The skateboard features Tomei baring her curves and the actress said she was offered an interesting pitch.

Conan O'Brien said "that is very cool. I'm going to ride that and be badly hurt."