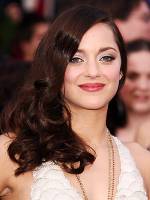 ) has reportedly signed on for the upcoming Batman film, 'The Dark Knight Rises'.

The actress' publicist says that her involvement in the film is currently "in discussions, and nothing has been confirmed yet" but some French newspapers are saying it's a done deal.

) has already been cast as Selina Kyle, the alter ego of Catwoman.

Nolan is said to have met with several actresses in recent weeks to find a suitable love interest for Christian Bale, including Kate Winslet (photos

), Rachel Weisz and Naomi Watts, before he decided on Cotillard.

The 35-year-old actress, who is expecting a baby in April with her French actor-director beau Guillaume Canet, is working out final scheduling issues.

The film is expected to start filming in end of May or mid-June, with shooting to take place in London and Los Angeles.