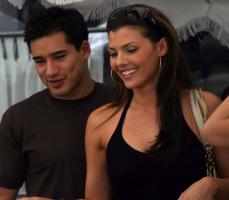 In his new memoir Mario Lopez claims he was never actually in with ex-wife Ali Landry.

Landry and Lopez famously annulled their marriage just two weeks after exchanging his vows. Landry has said she discovered Lopez wasn't being faithful to her.

"I had never addressed certain relationships, especially the truth and the handling of what happened in my first marriage," Lopez writes.

"I got inebriated and a little too friendly with a young lady," he says. "When it was time to return home, lightning hit me with the truth: I wasn't in love. But I walked down the aisle. Ali was hurt and angry, rightfully so."

And what does his wife Courtney Mazza have to say about his past relationships? Lopez says: "If I thought for a second it would have made her uncomfortable or that I was disrespecting her in any way, I wouldn't have done it."

"But she is very comfortable in her own skin and in our relationship, so I didn't really have any qualms."

In the book, Lopez also reveals he lost his virginity before this 13th birthday, almost became a father in his teens and had a "preteen romance" with 'Kids, Incorporated' co-star Stacy Ferguson, aka Fergie, who he says was his first kiss.