Mario Batali Stepping Away From 'The Chew' Amid Sexual Misconduct Allegations 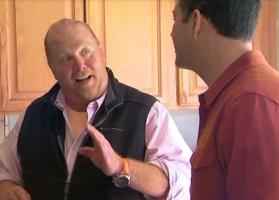 Celebrity chef Mario Batali is stepping away from ABC's 'The Chew' amid allegations of sexual misconduct.

Four women have come forward to accuse the restaurateur and chef of inappropriate touching.

One of the accusers says she introduced herself to Batali at a party. When someone bumped into her and caused her to spill wine down her shirt, the chef groped her saying "Let me help you with that."

"He just went to town, and I was so shocked," the woman says. "Jaw on the ground, I just stepped back from him in utter disgust and walked away."

Three other women all worked for the chef and have similar accusations. One of them claims he grabbed her from behind and pressed her against himself repeatedly over several years.

Batali does not deny the allegations and admits he acted in the ways described.

"I apologize to the people I have mistreated and hurt. Although the identities of most of the individuals mentioned in these stories have not been revealed to me, much of the behavior described does, in fact, match up with ways I have acted," Batali says.

"That behavior was wrong and there are no excuses. I take full responsibility and am deeply sorry for any pain, humiliation or discomfort I have caused to my peers, employees, customers, friends and family."

"We built these restaurants so that our guests could have fun and indulge, but I took that too far in my own behavior. I won't make that mistake again. I want any place I am associated with to feel comfortable and safe for the people who work or dine there."

Batali has hosted the daytime series 'The Chew' since 2011.