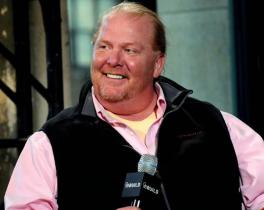 Mario Batali is bring rightly slammed for including a recipe for pizza dough cinnamon rolls in his apology for accusations of sexual misconduct.

The 57-year-old celebrity chef has been fired from ABC's 'The Chew' after four women accused him of "inappropriate touching in a pattern of behavior that spans at least two decades."

However, Batali isn't letting that stop him from pushing his recipes.

"As many of you know, this week there has been some news coverage about some of my past behavior," Batali writes to his readers in the Friday newsletter.

"I have made many mistakes and I am so very sorry that I have disappointed my friends, my family, my fans and my team. My behavior was wrong and there are no excuses. I take full responsibility."

"Sharing the joys of Italian food, tradition and hospitality with all of you, each week, is an honor and privilege. Without the support of all of you — my fans — I would never have a forum in which to expound on this. I will work every day to regain your respect and trust."

He then adds: "In case you're searching for a holiday-inspired breakfast, these Pizza Dough Cinnamon Rolls are a fan favorite."

Nothing says, "I'm sorry" for being a sexual predator like a recipe for Pizza Dough Cinnamon Rolls. Great work, @Mariobatali. pic.twitter.com/yHAnMEsGmV