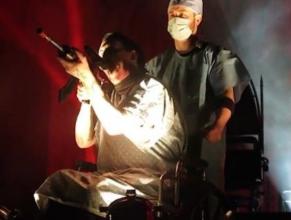 Marilyn Manson shocked the San Bernardino crowd by pointing a rifle at them during a recent concert.

Performing at the Knotfest Meets Ozzfest on Sunday, hours after the mass shooting at the First Baptist Church in Sutherland Springs, Texas, Manson pointed a fake rifle at the crowd.

Manson says his use of the fake rifle on stage was part of his "theater."

"In an era where mass shootings have become a nearly daily occurrence, this was an act of theater in an attempt to make a statement about how easily accessible semi-automatic weapons are and how seeing them has become normalized," Manson explained in a statement.

"My art has always been a reaction to popular culture and my way to make people think about the horrible things that happen in this world. My performance was not meant to be disrespectful or show any insensitivity."

"The prop I used on stage was handed to me with the approval of a police officer. My empathy goes out to anyone who has been affected by the irresponsible and reprehensible misuse of REAL guns."

San Bernardino was also the location of a mass shooting in December 2015 that left 14 people dead.