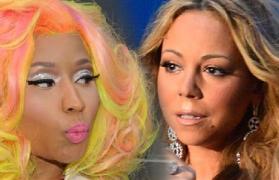 ) threatened to shoot her after their blow up on 'American Idol'.

"Before we went on the air, I called Mariah," Barbara Walters said on Thursday's 'The View'. "And I'm going to read from my notes. She said what you heard was troublesome but that's not what really worried her."

"She said that when Nicki walked off the set, multiple people heard Nicki say, 'If I had a gun I would shoot the bitch.' And she said there were staff members, hairdressers and others who heard it."

"She said she is very concerned and is with her twins. She doesn't feel that anything would happen but 'Nicki is unpredictable' and Mariah says she can't take a chance and she has hired extra security," added Walters.

"Nicki has not apologized but they have since been together at meetings, with producers, and judges. There was a meeting yesterday morning. After the meeting, Nicki said to Mariah 'I love you but we might fight again'. Mariah responded 'No, we will not'. At this point Mariah said she doesn't feel comfortable emotionally but she will continue because she loves the show and mentoring the contestants."

For her part, Nicki Minaj responded on Twitter: "I don't call Barbara Walters 'cuz I stand on my own two feet. Never needed an army. God is good. Insecurity is as cruel as the grave."

"I guess it hurts to have the producers tell u to your face that Nicki is the best judge we've had since Simon. Awww, poor you. Keep them lies coming."