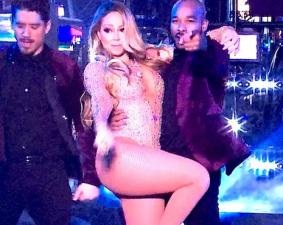 ) is speaking out about her disastrous performance on 'New Year's Rockin' Eve'.

After her team claimed that the singer was sabotaged by Dick Clark Productions for ratings, Carey is continuing the narrative and says Dick Clark would've never let it happen.

"It's not going to stop me from doing a live event in the future. But it will make me less trusting of using anyone outside of my own team," Carey tells EW.

"My true fans have been so supportive and I am so appreciative of them and everybody in the media that came out to support me after the fact because it really was an incredible holiday season that turned into a horrible New Year’s Eve," she admits.

"All I can say is Dick Clark was an incredible person and I was lucky enough to work with him when I first started in the music business. I'm of the opinion that Dick Clark would not have let an artist go through that and he would have been as mortified as I was in real time."

Carey walked off stage after a technical snafu, which some called a musical meltdown in front of a live audience of millions on ABC's 'Dick Clark's New Year's Rockin' Eve with Ryan Seacrest', during some of her biggest songs onstage.