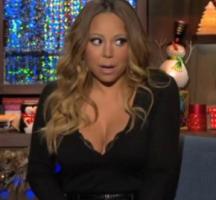 ) talks about her engagement to James Packer and divorce from Nick Cannon in the latest issue of 'Complex'.

"I never thought I would have babies with someone and then get divorced. Like, 'Oh, great job. Repeat your past,'" Carey says of her split from Cannon.

The pair share 5-year-old twins Moroccan and Monroe together. Carey was married to Canon from 2008 to 2014 and previously married to music producer Tommy Mottola from 1993 to 1998.

"But life happens. And it was supposed to happen. It's fine. For them, I wish it hadn't happened that way. For me, it was. Guess it's over. Call it a day."

Carey said Packer, her Australian billionaire businessman fiance, isn't shy about showing his interest in her music and career.

"I don't expect him to be at every little thing that I do, and vice versa," she says. "He's got a lot of stuff on his plate and so do I."

"Actually, I think if he didn't like my music, then how would I be able to handle him being around when all I'm doing is creating new stuff, doing whatever? It's cool."

Her first foray into reality TV with an eight-episode docuseries 'Mariah's World', which will no doubt feature her wedding, will air later this year.