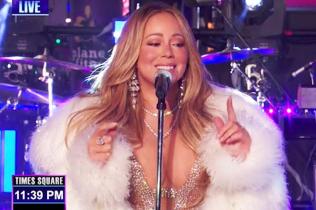 ) returned to the New Year's Eve stage on Sunday night's broadcast of 'Dick Clark's Rockin' New Years's Eve', one year after the debacle, and wanted some hot tea.

After she sang 'Vision of Love' in the frigid New York city temperatures, Carey wanted a much needed hot beverage.

"They told me there would be tea," Carey explained to the crowd, looking perplexed.

After discovering there was none to be found, the singer said she would "rough it" like the rest of crowd.

"Oh, it's a disaster. Okay, well, we'll just have to rough it. I'm going to be like everybody else, with no hot tea."

Carey was mocked in the moment on social media but assured fans she eventually found her hot tea after the live performance.