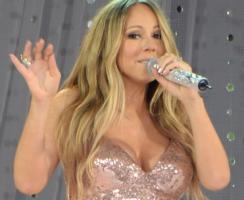 ) teased what viewers could expect and threw shade at ex Nick Cannon.

"I don't know that anybody really knows the real me," she said. "Hopefully they'll see other sides of me that they either find entertaining or does something good, instead of something bad. I can be bossy, but I try to be a nice person."

The singer said her children would be on the show but not much.

"Here's the thing, they could have their own show because that's how funny they are," she said of her kids. "I just have to figure it out – with Nick – how much they're in the show. They're in my life. We'll see. I think it should be sparing."

But when asked the same about Cannon, she unexpectedly threw shade at her ex.

"I can't speak for him. He’s his own person. He's cool about coming around the show.... I don't know what makes the final cut."

"I'm sorry, was that rude in some way?," she asked after her remark prompted laughter. "I'm so not trying to slay anybody."

Upon being asked about her past experience on television on 'American Idol', Carey said: "It was the most abusive experience."

"By the way, you've just driven me to drink."

'Mariah's World' has a premiere date of December 4.