Maria Shriver: I Wanted To Be In 'Anchorman 2' But Got Rejected 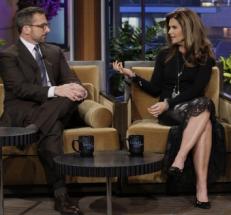 On 'The Tonight Show' last night, Maria Shriver told Jay Leno how much she wanted to be in the 'Anchorman' sequel but kept getting rejected by producers.

"I've seen the first one probably ten or fifteen times," said Shriver. "And when I heard they were going to make a second one, I thought sometimes you know when they make movies like that they have real journalists in them so I called and I thought I'll offer myself up."

"I'll look cool to my kids and stuff and... nothing. I called back again and nothing. And I called again and they're like 'No, we don't really want you in this movie,'" she continued.

"Then I heard they were going to do a promo reel with real journalists to promote 'Anchorman 2' so I once again stepped forward and they're like 'No, we just want men.' So they had Chris Cuomo, Wolf Blitzer and Anderson Cooper."

She then turned to Steve Carell, who was also on the show, and said: "I don't know if you know this, but women do the news too. There are anchorwomen too."

"So for 'Anchorman 3', I'm putting myself up again!," said Shriver.

"Oh, you will? So you have no pride," quipped Leno.