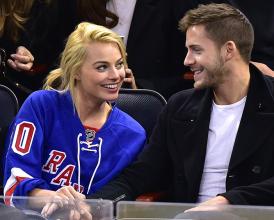 ) and longtime boyfriend Tom Ackerley have tied the knot in Australia.

Australia's The Daily Telegraph reports the couple wed in Byron Bay over the weekend.

Although they haven't made an official announcement, the news has been met with Margot Robbie posting a photo of her pear-shaped diamond wedding ring, kissing Ackerley in the background.

Local media also reports that the 26-year-old actress was wearing a T-shirt that read 'Say 'I Do' Down Under' when she arrived in her home country last week.

She met the British director in 2013 on the set of the World War II drama 'Suite Francaise'.

"I was the ultimate single gal. The idea of relationships made me want to vomit. And then this crept up on me," she told Vogue in May.

"We were friends for so long. I was always in love with him... And then it happened, and I was like, 'Of course we're together. This makes so much sense, the way nothing has ever made sense before.'"