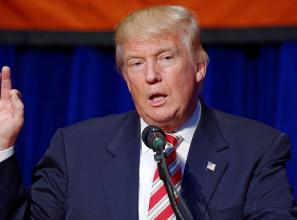 Donald Trump laughed at Florida Sen. Marco Rubio for sipping water during his response to the State of the Union a couple of years ago.

"Marco Rubio couldn't even respond properly to President Obama's State of the Union Speech without pouring sweat and chugging water. He choked," Trump said at the time.

"Next time Marco Rubio should drink his water from a glass as opposed to a bottle — would have much less negative impact."

He also brought up the moment several times during the campaign to ridicule Rubio.

However, on Wednesday, President Trump had a water bottle moment of his own.

Trump paused in the middle of a live speech at the White House to search for a bottle of water. After coming up empty-handed under his lectern, Trump was informed a water bottle was on the table right beside him.

He then picked up a bottle with both hands and took a sip that some comedians compared to a baby drinking from a milk bottle.

And Rubio certainly didn't miss the chance to weigh in once it began to go viral.

"Similar, but needs work on his form," Rubio said. "Has to be done in one single motion & eyes should never leave the camera. But not bad for his 1st time."

Trump pulls a Marco Rubio & slurps down water during his speech. But it’s worse than Rubio. Trump holds the bottle with two hands like it’s a baby bottle. Fitting.#ImpeachTrump #AMJoy pic.twitter.com/5CPKzSSCKq