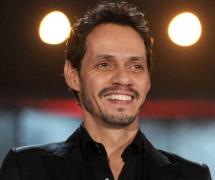 Marc Anthony is responding to some rather ugly comments that he was "not American" enough to be chosen to sing 'God Bless America' at Tuesday night's All-Star Game.

Anthony, who was born and raised in New York by Puerto Rican-born parents, can't understand the comments.

"You know, me singing, there was some statements made that people were upset that they would have somebody from another country sing it," says the singer.

"You say yes because of the honor, you can't deny that," he says of why he agreed to sing. "But then the day of, you're like, 'Why did I say yes to this?!' But you have to be some sort of ninja. There has to be some kind of recognition for someone who goes through this and survives it. It's scary."

Similar comments were made last month when an 11-year-old mariachi singer, born in Texas, sang the national anthem during the NBA finals.