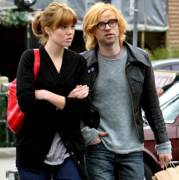 The 24-year-old Moore and 34-year-old Adams had been dating since March 2008, other than a briefly split in July. They tied the knot in a small ceremony on Tuesday in Savannah, Georgia, confirms Moore's publicist.

When asked about her engagement to Adams in February, Mandy said she wanted the wedding to be "less of a big deal."

"Hopefully, it can happen and slip by unnoticed by everybody. I guess we have to be sort of sneaky about it, but I'll see what I can accomplish," said Moore in what now sounds like a hint.

She described Adams as "a good egg. I'm in awe of him -- his brain, his passion. He's truly one of a kind."

Mandy Moore started out as a teen singer and later crossed into movies with featured roles in films such as 'License to Wed', 'A Walk to Remember', and 'American Dreamz' while Adams, is best known for his song 'New York, New York', which appeared on his album 'Gold', in 2001.