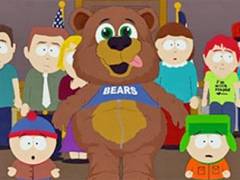 The Virginia man who warned 'South Park' creators that they risked death for an episode that showed prophet Muhammad in a bear costume, has been sentenced to 25 years in prison.

The 20-year-old man, Zachary Chesser, had told Matt Stone and Trey Parker "that what they are doing is stupid and they will probably wind up like Theo van Gogh for airing this show."

"This is not a threat, but a warning of the reality of what will likely happen to them," he said, referring to the Dutch filmmaker who was shot and stabbed to death by a Muslim extremist for a 2004 documentary about women and violence in Islam.

But the threats against Stone and Parker were only part of the case against Chesser, who was also caught trying to join a terrorist group in Somalia called al-Shabab.

Chesser was arrested after he tried to board a flight from New York to Uganda as he attempted to make his way to Somalia last year. He was on the no-fly list but was traveling with his infant to look less suspicious.

He subsequently admitted to federal authorities that he attempted twice to travel to Somalia to join the terrorist group as a foreign fighter. In October, Chesser pleaded guilty to charges that he provided material support to terrorists and that he communicated threats of violence.

According to the FBI, Chesser converted to Islam in July 2008. He then "became very 'extremist' in his beliefs" and began "watching online videos, discussions and debates and over-the-counter CDs almost obsessively."

"Zachary Chesser will spend 25 years in prison for advocating the murder of US citizens for engaging in free speech about his religion," says US Attorney Neil MacBride. "His actions caused people throughout the country to fear speaking out -- even in jest -- to avoid being labeled as enemies who deserved to be killed."