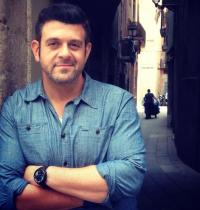 Richman's troubles started after he bragged about his 70-pound weight loss on Twitter then shared a picture of his new body with the hashtag "thinspiration."

This hashtag didn't sit well with some fans since it's often associated with anorexia and eating disorders.

After taking the heat, Richman lashed back and told one fan to "grab a razor blade and draw a bath. I doubt anyone will miss you."

He told another "does it look like I give a f--k."

Richman is now apologizing and saying he made those comments because it's a sensitive topic for him.

"I've long struggled with my body image and have worked very hard to achieve a healthy weight," he says. "I'm incredibly sorry to everyone I've hurt."

Travel Channel has now delayed 'Man Finds Food', which was slated to debut Wednesday. No new premiere date has been announced.