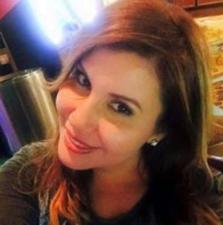 A 34-year-old man has been arrested after Lisa Marie Naegle, nurse and former 'Bridalplasty' contestant, was found dead.

Lisa Marie competed for a dream wedding and plastic surgery on the reality TV series in 2010. Police believe they have found her body in a shallow grave after she went missing on Saturday.

They have arrested Jackie Jerome Rogers, who was questioned about her disappearance and admitted that her body was buried in the backyard of his house in Lennox, near Los Angeles International Airport.

"We can confirm a body which we believe is Lisa Marie was discovered in a shallow grave at the suspect's home," police spokesman Sal Ramirez told reporters. "The detectives strongly believe it is her."

Police have not released a motive yet but Rogers was a student at West Los Angeles College where Lisa taught nursing classes.

Lisa Marie's husband, Derek Harryman, reported her missing when she never came home after a birthday party on Saturday night.

Harryman said he texted her around 2 AM to see where she was. When she called back "she sounded really, really drunk. She said, 'I'm going to get some food and then I'll be home.'"

The family tried to crack the case on their own after finding footage showing her leaving the beer hall with Rogers and getting into his SUV.

Rogers maintained she didn't go with him. When he was confronted with the proof, he said she had gotten out soon after.

That's when the family took their findings to police and helped them zero in on Rogers.