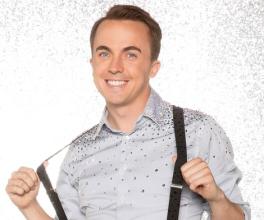 Malcom in the Middle‘s Frankie Muniz has revealed he suffered a major injury during his years as a race car driver.

"I had a crash and broke my back and injured my hands and ribs," the 31-year-old told his 'Dancing with the Stars' partner Witney Carson on the premiere episode of the competition.

"I think we talk about my injuries every day because I have a creaky, old body. I'm 31 but feel like I have the creaky, old body of a 71-year-old," he later told People.

"But I'm doing whatever it takes to take care of my body so I can continue dancing. I've raced Indy cars, I've played every sport, I consider myself a pretty athletic person, but I'm so sore. I'm so dead. I'm in the sauna, I'm icing."

Muniz says he's doing whatever he can to make him a better dancer and make it to the end.

"I'm so scared to dance in front of people," he admitted. "I didn't even know if I could dance, but now that I'm doing it I don't want to stop any time soon. I'm having the time of my life."