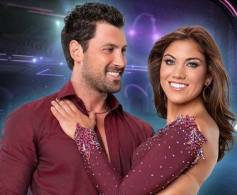 Maksim Chmerkovskiy says he won't apologize to 'Dancing with the Stars' judges for calling them out earlier this week.

Chmerkovskiy told Len Goodman that he should get out of the ballroom dancing business after judges criticized his amateur partner, Hope Solo, and told her it was her "worst dance of the season."

"Everybody's waiting for me to bow my head and plead for forgiveness," the dancing pro tells GMA. "I have nothing to apologize for."

"I have nothing to apologize for to Len Goodman and certainly not to Carrie Ann Inaba. She can make all the faces she wants. The last time I apologized was to my grandma when she was dying of cancer."

"When I got on this show six years ago I treated it as a dance competition and everyone here tried really hard to change my mind and say 'Look Maks, it's a show, there are other elements to it,' so I embraced it, but one thing I'm not going to embrace is pointed fingers and disrespectful remarks."

"Why is it that the judges are allowed to compare us to animals and say stuff they think is funny when it's nothing constructive at all and we can't say that they're wrong?"

As for Ricki Lake's partner, Derek Hough, siding with the judges, Maksim says that's easy for him to do.

"Derek Hough has been very supportive of his personal career on the show," Maksim explains. "When you say judges have been generous, with all due respect, if I had Nicole Scherzinger (photos

) followed by Jennifer Grey followed by Ricki Lake, I probably would not be very upset with the judges either."