Adam Savage Shows Making Of Holochess Board For 'Star Wars: The Force Awakens' 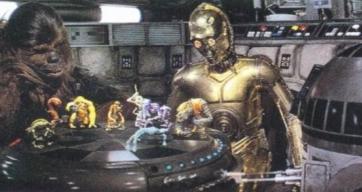 Adam Savage from 'MythBusters', a diehard 'Star Wars' fan, takes us behind the scenes to reveal how the holochess board sequence was created for 'The Force Awakens'.

As Savage reveals, it wasn't created using CGI as many moviegoers thought. Instead, the special effects were created using good old practical stop-motion with the help of Phil Tippett, who worked on the original film.

"We got a call from Kathy Kennedy saying that they wanted to restore the original chess set from Star Wars, and the problem was that the characters that we had made, you know, close to 40 years ago, were in a horrible state of disintegration," explains Tippett.

"They were made out of a rubber that disintegrates over time, and turns into like graham crackers."

So they reconstructed the characters with 3D printed silicone and reveals "we elected to pick up the game where we left off."

The short sequence served as a fun moment for fans after Finn accidentally hits a button that turns on the holochess board while on the Millennium Falcon.