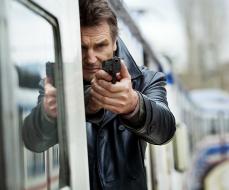 Maggie Grace plays a threatening message that her 'Taken' dad, Liam Neeson, left for her ex-boyfriend after they broke up.

"This is Brian Mills," Neeson begins. "We've never met... And if you play your cards right, we never will."

"Now listen, you're lower than the pond scum, so I'm just gonna say this once. You made two mistakes - your first mistake was dating out of your league. Your second mistake - well - Let's just say any more mistakes and I'll break your other arm - slowly."

"I don't need to say it, but I have a particular set of skills. And I don't want to waste them on you. Now you get your shit together."

And yes, Maggie Grace is now a redhead. She changed hair colors for a role in an upcoming film.