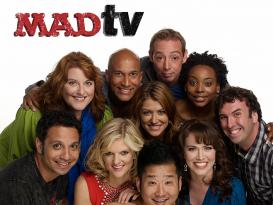 'MADtv' will be making a comeback.

The sketch comedy series, which aired for over a decade on Fox between 1995 and 2009, will return for eight episodes on the CW.

The network has ordered eight one-hour episodes that will feature some familiar faces as well as several new cast members.

'MADtv' helped launch the careers of 'Comedy Central's Keegan-Michael Key and Jordan Peele, Michael McDonald and Frank Caliendo among others.