Madonna's Older Brother Has Been Homeless For More Than A Year 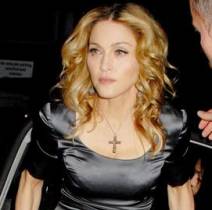 Anthony Ciccone tells the Michigan Messenger that he's been homeless for a year and a half and lives under a bridge in the city.

"My family turned their back on me, basically, when I was having a hard time," says Ciccone. "You think I haven't answered this kind of question a bazillion times – why my sister is a multibazillionarie, and I'm homeless on the street?"

"Never say never," he adds. "This could happen to anybody."

"I don't have any income, I've got to go collect bottles and cans, do odd jobs,"

The 55-year-old's last job was at the family winery, Ciccone Vineyard & Winery in Suttons Bay, Michigan.

"You have no idea how gruesome it is," he says of life on the streets. "I got frostbite on my feet last winter. A friend of mine lost all ten toes. Several have died of hypothermia."

"You go and find a place to stay warm like the lobby at the jail, or you take a walk to get your feet warm and go to Meijer's and sit in the lobby there."

The interview was done as part of a story about homeless people flocking to Traverse City, which is known for its network of services for people on the street.