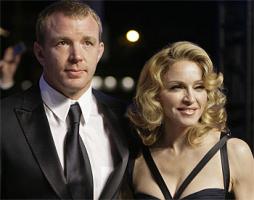 Performing in Boston just hours after announcing her divorce, Madonna wasted little time in taking a swipe at Guy Ritchie.

"This song is for the emotionally retarded. Maybe you know some people who fall into that category. I know I do," she told the crowd in her dedication for her song 'Miles Away'.

A song that she once said was inspired by her often long-distance relationship with Ritchie. It includes the lines: "I guess we're at our best when we're miles away... Uncomfortable silence can be so loud. Those three words are never enough. When it's long distance love."

It was an unexpected shot at her soon to be ex-husband, considering it was thought that the couple wanted the divorce to be a private matter, and that this would be a fairly low-key, out of court, divorce. But depending on whether Madonna keeps up the public attacks, this could get ugly.

It was the latest date on her Sticky and Sweet tour. Madonna told the audience that she had been told not to mention Gov. Sarah Palin, who she's blasted in previous cities.

So rather than talk about Palin, Madonna got around it by urging the crowd to vote, saying, "I hope you f--kers are registered to vote. Take some responsibility for your f--king country." she said, before adding, "Just vote for Obama!"