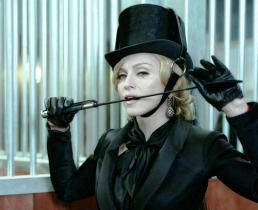 Madonna is standing up for her ex-husband Sean Penn in his lawsuit against Lee Daniels.

Penn filed a $10 million lawsuit against the 'Empire' creator in November for defamation after Daniels compared him to show star Terrence Howard, who's been repeatedly accused of domestic violence.

Howard, who has faced allegations of domestic abuse against his ex wives, previously admitted to having hit one of them.

The singer denies that Penn ever beat her in a declaration submitted as part of the lawsuit Lee Daniels.

"I am also aware of allegations concerning an incident that occurred in December, 1989, which purportedly resulted in Sean's arrest for domestic assault and battery against me. I know those allegations to be false."

"While we certainly had more than one heated argument during our marriage, Sean has never struck me, 'tied me up,' or physically assaulted me, and any report to the contrary is completely outrageous, malicious, reckless, and false."