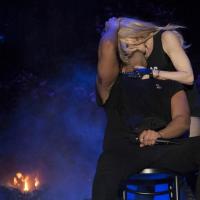 Madonna says that Drake had begged for her surprise kiss at Coachella.

The pair locked lips during a performance at the Coachella Music Festival last month.

"Don't misinterpret my shock!! I got to make out with the queen Madonna and I feel 100 about that forever," Drake said. "Thank you Madonna."

But now Madonna says she only did because the singer had begged her to. This after 56-year-old was asked in an interview if Drake was a decent kisser.

"You asked the million dollar question," Madonna replied. "I kissed a girl, and I liked it."

Asked what advice she would give to her younger self, she said: "Don't kiss Drake. No matter how many times he begs you to."