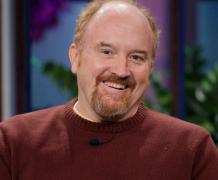 If you've seen 'American Hustle', you know that during the course of a movie Louis CK's character tells Bradley Cooper an ice fishing story that he never quite gets to finish.

Cooper's character is upset he cares about how the story ends.

Well, there is indeed an ending to the story and Louis CK got to tell it as he stopped by 'The Tonight Show' this week.

"The ending is that the kid, the brother, took a dump on the ice. That's the ending. He took a big anger dump on the ice. And it melted through the ice and it stuck in there the whole winter."

"And it created like a fissure between my father and brother and I was stuck in the middle."

Louis also revealed the running gag was director David O. Russell's idea and they made up the story as the film went along.