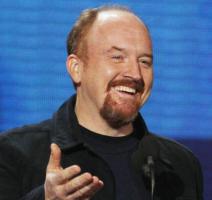 Louis CK, who has said he regrets once comparing Donald Trump to Hitler, explains that doesn't mean he would take back the remark.

The comedian complains he actually gave Trump too much credit with the comparison and, on a scale of liars, describes him as a "gross crook dirty rotten lying sack of s**t."

"Don't you just want God to show up and say 'I was just kidding, about everything,'" says CK. "I just wish he would."

Louis CK and Colbert also reminisce about working together nearly twenty years ago, a time when he believed Colbert was not of this Earth.