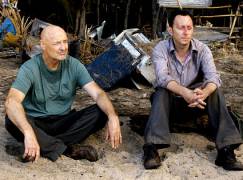 The project, from Desperate Housewives creator Marc Cherry, would be set in the town of Hallelujah, Tennessee, which is being torn apart by the forces of good and evil until a stranger (Law & Order's Jesse L. Martin) comes to town, bringing justice, and possibly peace.

O'Quinn will portray Del, a charismatic but corrupt local millionaire who runs the town.

O'Quinn, who won a Best Supporting Actor Emmy for 'Lost' in 2007, was set to reunite with co-star Michael Emerson in a comedy drama about two former black-ops agents before landing the gig but that didn't make it to the pilot stage.