'Lost's Jorge Garcia To Guest Star On 'Once Upon a Time' 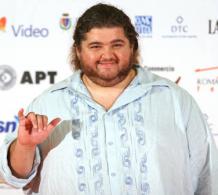 'Lost' alum Jorge Garcia, who currently stars on 'Alcatraz', has landed a guest starring role on 'Once Upon a Time'.

Garcia will take on the role that is only described as 'The Giant'.

But considering creators Adam Horowitz and Edward Kitsis, who also worked on 'Lost', have confirmed they intend to take on the tale of Jack and the Beanstalk this season, it sounds like Garcia will be playing the man Jack meets after climbing up.

As of right now, he's only slated to appear in one episode.

Meanwhile, 'Lost's Claire, Emilie de Ravin, was promoted to a regular character for season two in her role as Belle as was Meghan Ory's Ruby/Red Riding Hood.

'Once Upon a Time's second season premieres on Sunday, September 30 at 8 PM EST.