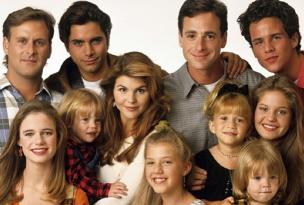 In an appearance on 'Watch What Happens Live!' this week, Lori Loughlin reprised her role as 'Full House's Aunt Becky.

"Every episode of Full House always brought with it an important social message," said Andy Cohen. "To celebrate those heartfelt moments, it's time for a field trip to the Clubhouse Playhouse."

"We will be performing the famous soapbox derby scene from Full House. Jerry O'Connell will play the pivotal role of D.J. Lori, of course, will reprise her role as Aunt Becky. I will, of course, be playing baby Michelle, as played by Ashley Olsen, not the other one."

The pair then donned wigs to reenact a scene in which Michelle Tanner chooses not to compete in a soapbox derby after being told that girls can't race cars.

Loughlin revealed earlier this week that she -- along with half of the cast -- don't yet have deals to return for the 'Full House' spin-off, 'Fuller House'.

"I certainly hope so, yes," she said when asked if she would join her co-stars for the series produced by John Stamos, her on-screen husband and Uncle Jesse.