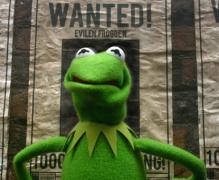 Steve Whitmire, the performer behind Kermit the Frog since 1990, is leaving The Muppets.

Whitmire, who was handpicked to take over the role after Jim Henson died in 1990, will be replaced by Matt Vogel. Along with his puppeteering skills, he was known for his quick wit that provided the character the personality we know today.

Vogel will make his in a 'Muppets Thought of the Week' video as early as next week. He had often worked with Whitmire on 'Sesame Street' as the assistant puppeteer for Ernie, responsible for the hand movements while Whitmire did the voice and facial reactions.

A Muppets Studio spokesperson didn't provide additional details about the reasons behind the exit but confirmed the news. Whitmire had been with the studio since 1978.