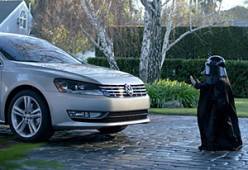 Only in this case, Thor really has the Force.

The ad also include subtle mentions fans of the superhero may notice, including the family dog being named Loki, the Asgard license plate on the car, and the Stark coffee cup.

'Thor' is set to be released nationwide on May 6.