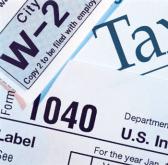 With this year's tax deadline quickly approaching, California has released a list of some of its biggest tax delinquents.

The list is part of a new California law that requires income tax authorities to update and publish the names and amounts owed by the 500 largest income-tax delinquents.

The pair didn't make the California list because they owe federal income taxes, not state. However, the $1.1 million Richie owes the IRS could result in the singers' assets being seized if he doesn't pay up in a timely manner.