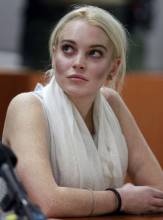 ) was handcuffed in court and taken to jail after her probation was revoked by Los Angeles judge Stephanie Sautner Wednesday.

Sautner dismissed Lohan's attorney Shawn Chapman Holley's argument that the actress was slow to complete her community service because she had to leave town for work commitments.

"She failed to show for nine scheduled appointments, and when she did appear, she blew them off after an hour or an hour and a half."

Upon discovering that Lohan told her probation officer that she didn't like the women's shelter because she "wasn't interacting with anyone so the service was not fulfilling," the judge didn't hold back.

"Is that what the service is about? It's supposed to fulfill the individual? Perhaps community service is work. She's supposed to be an actress, from what I hear," she said before reminding Lohan that "probation is a gift."

Lohan's lawyer pointed out that a report from her psychiatrist said Lindsay "reached a turning point in her accountability and maturity."

"Failing to show up nine times to the shelter is reaching a turning point in her maturity?," the judge retorted.

The 25-year-old was then handcuffed and booked. She was later released on $100,000 bond with a scheduled a hearing set for November 2.

Lohan was sentenced to complete 480 hours of community service in June, which required her to volunteer at a downtown Los Angeles women's shelter and the county morgue.