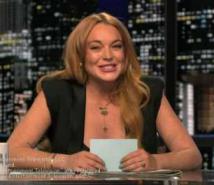 ) says she nearly lost her ring finger after getting caught up in the boat's anchor.

"This is the result of me trying to anchor the boat by myself," she told fans along with a picture of her heavily bandaged finger on Snapchat. "My poor finger."

The 30-year-old's hand apparently became entangled in the anchor's rope and pulled her down into the water. In the process of trying to untangle herself, the anchor cut off the top of her finger.

"I almost lost my finger from the anchor. Well, I lost half my finger, thank goodness we found the piece of my finger," Lohan explained. "I just had surgery to fix it. It hurts so bad."

Lindsay Lohan has been spending time with friends in the Mediterranean since her public fight with fiance Egor Tarabasov, who she accused of cheating on her.