Lindsay Lohan: I've Created 'Whirlwind of Garbage' Around Myself 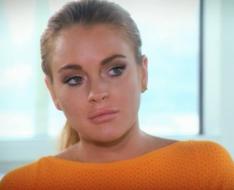 In her interview with Oprah Winfrey that aired Sunday, Lindsay Lohan (photos

) insisted this time was going to be different.

It was the troubled actress' first interview since getting out of her sixth stint in rehab.

"I don't think in the past I've ever fully surrendered to the fact that I just really need to shut up and listen," Lohan said. "In this case, I wasn't fighting at all. I just let go and was able to just be like, 'OK, you probably do know what's best.'"

"I'm in a different head space," she claimed as she promised to be "present, clear-headed and focused."

"I feel whole again and I have such a desire to want to keep this feeling and stay this way, and I'm willing to do whatever it takes," Lohan said.

Whether viewers believed those statements or not, the 27-year-old finally admitted an addiction to alcohol: "In the past was a gateway to other things for me."

She also admitted to having used cocaine more than "10 or 15 times." Although she said now the only thing she is on is "vitamins."

It's widely believed that this is the once promising child star's final chance in Hollywood.

"I've been given a lot of chances, and I'm really lucky to still have the support and someone like you even coming and sitting to do this interview with me. And I'm grateful for it," she said.

As for her label as the prime example of a "child star gone wrong," Lohan said: "I hate that label and that title. That's not what I ever aspired to be."

"I'm my own worst enemy," she explained. "There are so many powers greater than me in the world, and I've been blessed and lucky enough to be given a gift to share with other people, and I think for so long I kept that so locked down and chained down, just by creating this whirlwind of garbage around myself."