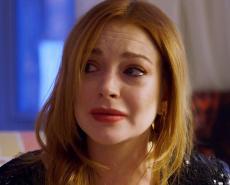 In the final episode of her OWN docu-series, Lindsay Lohan (photos

) revealed she had a miscarriage during the filming of the program.

The 27-year-old said the two-week break which delayed production of the Oprah Winfrey backed series was actually caused by the miscarriage.

"No one knows this, I had a miscarriage for those two weeks that I took off. It's a very long story," she said.

"That's why on the show when it says she doesn't want to come down, I couldn't move, I was sick. Mentally, that messes with you."

"Watching this series, I just know how I felt at that moment and I can relate to that girl, which sounds kind of crazy, but I'm like, "Oh my god, this is really sad. Who's helping her?"

"There was a lot going on in my life then. I cried so many times watching it. Because I don't see it as me - it's strange. It's weird."

Lohan chose not to reveal the name of the father.

As for the leaked list of former lovers, Lohan admitted it was a part of her rehab program.

"I'm pretty sure who and they're not in my life anymore," she said of the person who leaked it. "I don't care about me. I care about the people that are involved with other people because it's really unfortunate and disrespectful."

"That's not something I'd show anyone except my sponsor, who is also a very well-known person."