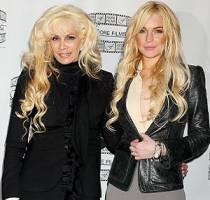 The 24-year-old actress, who is in talks to play late mobster John Gotti's daughter Victoria Gotti, flew in to attend the event further fueling rumors that she is close to landing the role.

"Lindsay is a terrific actress," said Marc Fiore, the movie's producer at the event. "Nothing has been finalized, but we are definitely in talks."

"She looks a lot like Victoria when she was that age. It would be the same age range so it just kind of hit. And Lindsay and her mom are very good friends with Victoria Gotti."

John Travolta has already signed on to play the mobster and Joe Pesci has been confirmed to play Angelo Ruggiero, John Gotti's second in command.

"I know first hand that Lindsay Lohan happens to be a big fan of mine," Travolta said when asked about the possibility of Lohan starring in the feature. "I've always thought she was gorgeous and talented and filled with a lot of depth. So, I think that whatever she would like to do would be great with me."

"This is probably the most interesting untold story in this country."

"While there have been several productions about my father, none of them have captured the truth about my family and what went on behind closed doors," said John Gotti Jr. "I want them to bring it as close to fact as possible."