Lindsay Lohan Calls Her Dad A 'Loser' For Releasing Conversation 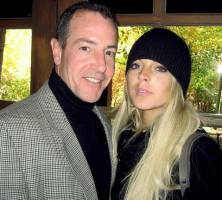 ) is blasting her dad, Michael, for releasing an old phone conversation she had with him to a tabloid.

The phone call reportedly features Lindsay crying uncontrollably to her father: "Mommy says that I'm worse than you were. And she’s defending... she doesn't back me... she doesn't stand by me."

"No one cares about me," she says. "They don't, by the way. It's about how they feel, not how I feel. It's not about me. It's never been about me, unless I fight for it."

Michael claims he put out the phone call to "prove a point" and encourage the 23-year-old to finally get some help but Lindsay is understandably furious.

"My father is such a loser and those recordings are from years ago," says Lohan. "To release personal things is foul enough, but to edit them. I used to think that he needed the book for dummies on learning how to be a father."

"He's needs the book for dummies on how to be a man."

The actress is working on getting a restraining order against her 'concerned' father and may even file a criminal complaint.

"Lindsay's concerned about recent actions of his," says her lawyer. "She is concerned about defamatory statements about her own personal safety and has instructed me to explore all legal options available to her to get him to stop and to leave her alone."

"We're trying to work out where the tape was recorded. If it was in California, the law is very clear. You can't do that. Both parties have to authorize it being recorded and there's no question Lindsay did not authorize it. If it happened here, he's in violation of the criminal law."