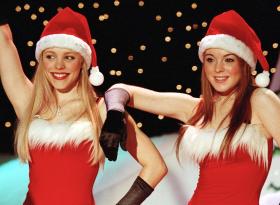 ) is apologizing to an English town after breaking her promise to attend its Christmas lighting ceremony.

The actress posted a video saying she couldn't attend Thursday's event to switch on the Christmas lights in Kettering because she was busy.

"I really wanted to make it but with my busy schedule I wasn't able to and I appreciate the offer," she said.

Lohan was invited to turn on the town's Christmas lights after she admitted she had no idea where Kettering, located 80 miles north of London, was.

"I think that when you're an international celebrity who says you're going to do something then people expect you to do it," says town lawmaker Philip Hollobone. "I think most of us thought that she wouldn't actually come but I think there was a little bit of all of us that hoped she would."

Kettering wish I could be with you today sending all my ??. Happy holidays!! pic.twitter.com/a383OipE22