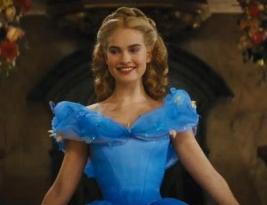 Lily James, the star of Disney's live-action remake of 'Cinderella', says no CGI was used for the tiny waist fans see in the trailer.

The 25-year-old actress says it's all her in the blue ball gown and even went on a liquid diet to fit into the corset.

"I naturally have a really small waist," she tells E!. "The skirt's big and the corset pulls me in, and that's the point. That's the shape costume creator Sandy Powell created."

"When it was on we would be on continuous days so we wouldn't stop for lunch or a lovely tea like this — you'd be sort of eating on the move," she adds.

"In that case, I couldn't untie the corset. So if you ate food it didn't really digest properly and I'd be burping all afternoon, and it was just really sort of unpleasant."

If you haven't seen it, watch a trailer for the movie to be released on March 13 below: