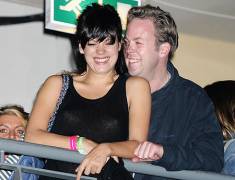 "Lily Allen and Sam Cooper are very happy to confirm that Lily is expecting their first child," her publicist says in a statement.

Her publicist says that Lily is three months pregnant and 'absolutely delighted'. But don't expect her to slow down just yet.

"Lily's professional commitments will carry on as normal, including a scheduled performance at the Big Chill this weekend."

The 25-year-old has been dating the 32-year-old owner of an upscale painting and decorating company for a year.

After describing Cooper as a 'normal bloke' when they began dating, she's recently started referring to him as 'the love of my life'.

"Sam treats me differently," she said in a recent interview. "He's told me he'll look after me forever. That's what I've always wanted - someone to look after me."

"We've never had one argument and there's absolutely nothing about him that annoys me... He's not impressed by what I do."

The baby news comes roughly two and a half years after she suffered a miscarriage with Chemical Brothers' Ed Simons.