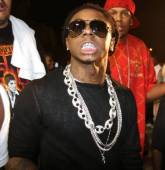 Lil Wayne's sentencing in a weapons case has been postponed for nearly a month so he could have dental surgery before going to jail.

The multi-platinum selling rapper was expected to be formally sentenced and then sent to New York's Rikers Island prison. Instead, his sentencing has been rescheduled for March 2.

His plea deal calls for a one-year term in a city jail, though good behavior could cut that to about eight months.

His attorney, Stacey Richman, explained that Lil Wayne needed to have a cracked tooth fixed before his year-long prison stay so he was headed home to Miami for dental work.

"It is a medical situation that, like it would for any of us, has to be addressed," she said outside court.

Why didn't he get it done sooner? She said the rapper's dentist had been out of the country doing "charitable work."

Judge Charles H. Solomon said that this was the final delay he wanted to see in the case: "I don't want this to get pushed back anymore. This is the last adjournment."

In October, Lil Wayne pleaded guilty to illegally carrying a loaded .40-caliber semiautomatic gun on his tour bus in July 2007. Police found the gun when they stopped the bus after a concert.

"I'm out this bitch," he said. "To all my fans, my real fans, I really, really, really truly love you. I love you with all of me, for real. I'll probably be loving everything else because I love you so much."

"Thank you from the bottom. Do not forget about me 'cause I will forever think about you, and I cannot wait for you to see me again. I'm out."