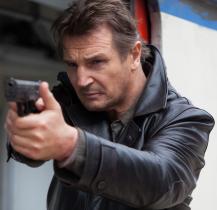 At the Toronto International Film Festival, Neeson called the unlikely turn in his career "all a pure accident."

"They're still throwing serious money at me to do that stuff," he explained.

A dramatic actor for most of his career, Neeson became a bankable action hero with 'Taken', which debuted in 2008.

Neeson has two more action films set for release including 'Hard Powder', which sees him star as a snowplow driver who goes after the drug dealers who killed his son.