Letterman Was Target of $2 Million Extortion Plot Over Sexual Affairs 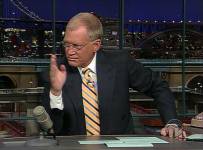 On his late night talk show Thursday, David Letterman admitted that he had been the victim of a $2 million extortion attempt and confessed that it was over sexual relations he had with female members of staff.

"This morning, I did something I've never done in my life," Letterman said. "I had to go downtown and testify before a grand jury."

He said it all began three weeks ago, when he received a package from an individual who claimed to have information on his sexual relationships with female employees and threatened to go public unless Letterman handed over $2 million.

"That's a little hinky. I just want to reiterate how terrifying this moment is. Because there's something very insidious about, is he standing down there, is he hiding under the car, am I going to get a tap on the shoulder?"

Letterman said he referred the matter to the Special Prosecution Bureau of the Manhattan District Attorney, which conducted an investigation that included issuing a fake $2 million check to the individual. That eventually resulted in an arrest of a former CBS employee this week.

"The creepy stuff was that I have had sex with women who work for me on this show," Letterman told a stunned audience, as he mixed in a few laughs. "My response to that is, yes I have," Letterman said. "Would it be embarrassing if it were made public? Perhaps it would, especially for the women."

"But that's a decision for them to make if they want to come public and talk about the relationships. I know what you're saying," he said. "I'll be darned, Dave had sex."

This isn't the first time Letterman has been the victim of an extortion attempt. Four years ago, police revealed a house painter's plan to kidnap Letterman's baby son, Harry, for a $5 million ransom.

Letterman has been married to Regina Lasko, the mother of his child, since March. The two have dated since 1986.

If you're so inclined, check out the segment in its entirety below: