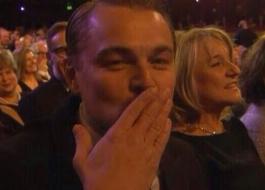 The BAFTA awards introduced the Kiss Cam during its Valentine's weekend broadcast of the British awards show.

Host Stephen Fry began by ribbing America about all the great things it's given the world such as leaf blowers and bacon covered by syrup.

"Talking of America, one of the wonderful things that great nation has given the world…is the kiss cam," he then said.

"It's Valentine's Day and it's up to you out there. So which two lovebirds will our Valentine heart embrace?"

But the best pairing went to Leonardo DiCaprio on Dame Maggie Smith with the hearthrob plating a kiss on the 'Downton Abbey' star.